Great art in a test tube

Organic chemistry has developed into an art form where scientists produce marvelous chemical creations in their test tubes. Mankind benefits from this in the form of medicines, ever-more precise electronics and advanced technological materials. The Nobel Prize in Chemistry 2010 awards one of the most sophisticated tools available to chemists today.

This year’s Nobel Prize in Chemistry is awarded to Richard F. Heck, Ei-ichi Negishi and Akira Suzuki for the development of palladium-catalyzed cross coupling. This chemical tool has vastly improved the possibilities for chemists to create sophisticated chemicals, for example carbon-based molecules as complex as those created by nature itself. 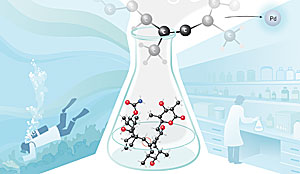 Carbon-based (organic) chemistry is the basis of life and is responsible for numerous fascinating natural phenomena: colour in flowers, snake poison and bacteria killing substances such as penicillin. Organic chemistry has allowed man to build on nature’s chemistry; making use of carbon’s ability to provide a stable skeleton for functional molecules. This has given mankind new medicines and revolutionary materials such as plastics.

In order to create these complex chemicals, chemists need to be able to join carbon atoms together. However, carbon is stable and carbon atoms do not easily react with one another. The first methods used by chemists to bind carbon atoms together were therefore based upon various techniques for rendering carbon more reactive. Such methods worked when creating simple molecules, but when synthesizing more complex molecules chemists ended up with too many unwanted by-products in their test tubes.

Palladium-catalyzed cross coupling solved that problem and provided chemists with a more precise and efficient tool to work with. In the Heck reaction, Negishi reaction and Suzuki reaction, carbon atoms meet on a palladium atom, whereupon their proximity to one another kick-starts the chemical reaction.

Palladium-catalyzed cross coupling is used in research worldwide, as well as in the commercial production of for example pharmaceuticals and molecules used in the electronics industry.

Prize amount: SEK 10 million to be shared equally between the Laureates.

The Royal Swedish Academy of Sciences, founded in 1739, is an independent organization whose overall objective is to promote the sciences and strengthen their influence in society. The Academy takes special responsibility for the natural sciences and mathematics, but endeavours to promote the exchange of ideas between various disciplines.

Information for the Public