The Royal Swedish Academy of Sciences has decided to award the Nobel Prize in Chemistry for 2009 jointly to Venkatraman Ramakrishnan, MRC Laboratory of Molecular Biology, Cambridge, UK, Thomas A. Steitz, Yale University, New Haven, CT, USA and Ada E. Yonath, Weizmann Institute of Science, Rehovot, Israel “for studies of the structure and function of the ribosome”.

The ribosome translates the DNA code into life

The Nobel Prize in Chemistry for 2009 awards studies of one of life’s core processes: the ribosome’s translation of DNA information into life. Ribosomes produce proteins, which in turn control the chemistry in all living organisms. As ribosomes are crucial to life, they are also a major target for new antibiotics.

This year’s Nobel Prize in Chemistry awards Venkatraman Ramakrishnan, Thomas A. Steitz and Ada E. Yonath for having showed what the ribosome looks like and how it functions at the atomic level. All three have used a method called X-ray crystallography to map the position for each and every one of the hundreds of thousands of atoms that make up the ribosome.

Inside every cell in all organisms, there are DNA molecules. They contain the blueprints for how a human being, a plant or a bacterium, looks and functions. But the DNA molecule is passive. If there was nothing else, there would be no life. 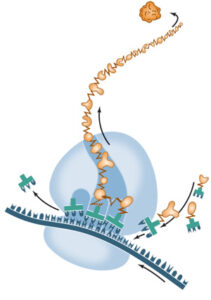 The blueprints become transformed into living matter through the work of ribosomes. Based upon the information in DNA, ribosomes make proteins: oxygen-transporting haemoglobin, antibodies of the immune system, hormones such as insulin, the collagen of the skin, or enzymes that break down sugar. There are tens of thousands of proteins in the body and they all have different forms and functions. They build and control life at the chemical level.

An understanding of the ribosome’s innermost work-ings is important for a scientific understanding of life. This knowledge can be put to a practical and immediate use; many of today’s antibiotics cure various diseases by blocking the function of bacterial ribosomes. Without functional ribosomes, bacteria cannot survive. This is why ribosomes are such an important target for new antibiotics.

This year’s three Laureates have all generated 3D models that show how different antibiotics bind to the ribosome. These models are now used by scientists in order to develop new antibiotics, directly assisting the saving of lives and decreasing humanity’s suffering.

The Prize amount: SEK 10 million to be shared equally between the Laureates.

The Royal Swedish Academy of Sciences, founded in 1739, is an independent organization whose overall objective is to promote the sciences and strengthen their influence in society. The Academy takes special responsibility for the natural sciences and mathematics, but endeavours to promote the exchange of ideas between various disciplines.

Information for the Public