The Royal Swedish Academy of Sciences has decided to award the Crafoord Prize in Biosciences 2019 to Sallie W. Chisholm, Massachusetts Institute of Technology (MIT), Cambridge, USA, “for the discovery and pioneering studies of the most abundant photosynthesising organism on Earth, Prochlorococcus”. 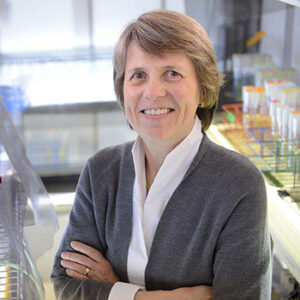 A miniscule organism of huge importance

The Prochlorococcus cyanobacteria is the smallest and most common oxygen-producing organism in the world. It dominates large areas of the World Ocean and is responsible for a considerable share of the photosynthesis on Earth, yet was entirely unknown until the 1980s. Sallie Chisholm is awarded the Crafoord Prize 2019 for her discovery of and research into this incredible organism.

Microorganisms in the world’s seas and oceans perform a large part of all photosynthesis on Earth. In the multitude of thousands of different species, there is one that is unique: Prochlorococcus cyanobacteria, which is the world’s smallest and most common photosynthesising organism. It is about half of a micrometre in diameter, and there can be 100 million of them in a single litre of water.

Sallie (Penny) Chisholm and her research colleagues discovered Prochlorococcus on expeditions in the Atlantic and Pacific Ocean during the second half of the 1980s. The group had the idea of using a flow cytometer – an instrument that had so far mainly been used in medical research – to study microorganisms in seawater. Results from the instrument showed a weak signal that was initially interpreted as background noise. However, additional research showed that this signal came from something living – an extremely small, photosynthesising bacteria. This discovery was published in 1988, but Prochlorococcus was not named until 1992.

Sallie Chisholm has dedicated much of her research to studying Prochlorococcus. It is found in all oceans and seas and is the dominant photosynthesising organism in all nutrient-poor, relatively warm waters. This is a significant proportion of the Earth’s surface, so the global population of this type of bacteria is estimated at about 3*1027 (3,000,000,000,000,000,000,000,000,000) individuals.

Genetic studies have shown that Prochlorococcus has exceptionally few genes – but also very many. One individual can have as few as 1,700 genes, the fewest of all known photosynthesising organisms. However, there is great variation between different populations and, in total, the species has around 80,000 different genes – approximately four times more than humans. A thousand or so of these genes are common to all individuals.

Prochlorococcus is interesting in itself, but may also contribute to better understanding of the truly significant phases in the development of life on Earth. As a relative of the organisms that, a few billion years ago, began to deliver oxygen to the atmosphere, it can help us understand this decisive stage. Prochlorococcus is also extremely relevant to our understanding of how seas and oceans will change in the future because of ongoing climate change.

Sallie W. Chisholm, born in 1947 in Marquette, USA. Ph.D. in 1974 from the University at Albany, State University of New York, USA. Institute Professor at the Massachusetts Institute of Technology, MIT, Cambridge, USA.

The prize award ceremony will be held at the Assembly Hall, Lund University, on 15 May 2019.

The Crafoord Days are celebrated 13–15 May 2019 at Lund University.

The Crafoord Prize is awarded in partnership between the Royal Swedish Academy of Sciences and the Crafoord Foundation in Lund. The Academy is responsible for selecting the Crafoord Laureates.

The disciplines, which change every year, are mathematics and astronomy, geosciences, biosciences and polyarthritis (e.g. rheumatoid arthritis). The prize in polyarthritis is awarded only when scientific progress in this field has been such that an award is justified.

The prize disciplines are chosen as a complement to the Nobel Prizes.

The illustrations are free to use for non-commercial purposes. Attribute ”©Johan Jarnestad/The Royal Swedish Academy of Sciences”.

Penny Chisholm (text) & Molly Bang (illustrations): The Sunlight Series – a series of popular science books, with the most recent published in 2017.